Where the Candidates Stand on Net Neutrality and Privacy 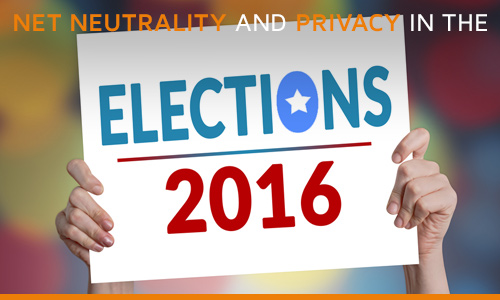 Where the Candidates Stand on Privacy Issues: A New Concern in Elections

For the first time, the Internet has become a hot subject in an election. In every debate, candidates are taking a position on privacy issues such as mass surveillance and net neutrality’s pros and cons to finding a balance between personal privacy and helping law enforcement find terrorists.

Net Neutrality pros and cons are a part of the discussion and the candidates weighed in.

On February 26, 2015, the FCC ruled in favor of Net Neutrality to keep Internet traffic open and free. The Internet is classified as a utility, and subject to government scrutiny. The ruling includes:

These rules, the President assured, are not intended to put undue burden on ISPs. They are designed to keep the Internet open, protect freedom of speech and foster competition and innovation.

11 months since its enactment, Net Neutrality seems to be working.

The Unintended Consequences of Net Neutrality

Others argue that amid already stifling regulations, Net Neutrality will open the door to the FCC micromanaging the Internet and imposing taxes because it is now classified as a utility.

Where the Top Presidential Candidates Stand on Issues – Net Neutrality:

The question of who favors stronger privacy rights isn’t quite so neat. Interestingly, the list of candidates in favor of less snooping comes from the farthest left and right of center.

Hillary Clinton has been on both sides of the issue: As a senator, she voted for the Patriot Act, which permitted much of the surveillance in 2001, and to renew it 5 years later.

But after a federal court ruled in May 2015 that the telephone metadata-gathering program was illegal, she began advocating for tighter restrictions on the NSA’s information gathering.

Where the Candidates Stand on Issues – Mass Surveillance:

Privacy issues and an open Internet have become one of the biggest challenges we all face. We want to catch the bad guys, but don’t want to be spied on. Finding the balance will be difficult. See you at the polls!